The Wheels on the Bus…

A few months ago, the EMS personnel of Mecklenburg County lost a dear and beloved post.  Legend has it that Post 50 was attacked by a renegade ambulance.  Post 50 was never known for being structurally sound, but was a great place to take a nap and was near a plethora of decent places to grab a meal.  It was close enough to the highway that one was likely to get a decent trauma there, and it is no secret that the crazies on the north end of the county are nothing short of spectacular.  As homage to the memory of post 50, I’ve opted to write of the things we EMS folk encounter while driving a beast of an ambulance.  Rest in peace, Post 50. 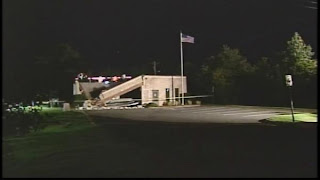 The Wheels on the Bus…

For reasons completely unknown to me, the general public seems to acknowledge that “ambulance drivers” are professionals impervious to other drivers, weather and road conditions, distraction by shiny objects or attractive joggers, and the laws of physics.  Statistically, it makes sense that emergency personnel are involved in less collisions that the general public because there are less emergency vehicles by comparison.  That stated, when it happens to us, we pretty much always make the news, so there is no excuse for members of the populace to believe ambulances are safer than their own vehicles; regardless, this appears to be the case.

During a snowstorm earlier this year, several people I treated had called 911 for mundane flu-like symptoms because they weren’t comfortable driving to the hospital.  I can understand feeling uncomfortable driving in less than ideal conditions, but I fail to understand reasoning riding backward on a stretcher in a box of potential shrapnel weighing a couple tons, surrounded by loosely restrained potential projectiles, driven by people who likely chose their profession because they think gruesome stuff is cool as a viable alternative.  I also don’t understand going to the emergency room for the flu, but that is not my decision to make either.  In my agency, we have systems in place to assist us with such situations.  Despite our typically moderate climate, we have chains that can flow beneath the tires to add traction; sometimes they even function!

For the few non-EMS readers, I’m going to let you in on a little secret: we’re every bit as incompetent as the rest of you retards out there.  I can’t speak for my coworkers or other emergency personnel, but I can honestly say with total confidence that I am just not that great of a driver.

When I turn on the lights and sirens, I’m extremely attentive.  I make it a point to know where every vehicle is and their approximate speeds, constantly looking out for danger.  I realize using the lights and sirens is precarious in and of itself, and I see myself as almost a guardian to those in other vehicles, regardless of how much they refuse to get the hell out of my way.  (For the record, the protocol is to pull to the right.  Unless you’re in England or Australia, in which case I have no idea what you’re supposed to do.)

Once the blinky lights and blaring sirens are off, and I’m no longer the shiniest thing around, I regress into my usual shitty driver self.  I get it honestly; my mom is a terrible driver.  I’ve actually had conversations with her discussing the hazards of playing Tetris while driving.  I won’t even get into my grandmother’s inattentive driving or my aunt’s refusal to admit her belief that streetlights don’t apply to her, regardless of video documentation.  I hail from a long line of awful drivers.  I fiddle with the radio dial.  I know that my phone is in my pocket, and I have to actively fight the urge to access it.  Whatever bizarre topic piques my interest can easily cause me to drive directly past a street on which I needed to turn.  A really striking jogger runs by with no shirt on and the next thing I know, I have to stand on the brake pedal to keep from flattening the car in front of me.  I once saw a double rainbow and enjoyed the sight until my partner reprimanded me from the back of the ambulance, and I realized I was busted.   I’m susceptible to all the minutiae that cause people to play bumper cars with one another every day.  I’ve even discovered that if you opt to drive your ambulance into a field after a day of rain, your supervisor will laugh at you when he/she comes to pull you out of the muddy hole you’ve created.

Reverse gear, however, remains the bane of my existence.  I’ve seen Snatch; I understand the principle that when you are backing up, things come at you from behind.  At my agency, the policy is that your partner gets out of the truck to assist you and make sure you don’t hit anything.  Needless to say, this policy is in place for a reason: the ambulance is big, and we hit stuff all the time.

My usual partner likes to back drivers up by moving his arm around in the direction one needs to turn the wheel, which can be quite the deceptive move.  One day in the ambulance, a new hire, FNG, was attempting to park, with my partner backing him up.

FNG asks me, who is reading a book in the backseat, “Which way am I supposed to turn?  I don’t understand what he’s doing.”

“Is he motioning for you to Wax On or Wax Off?”

“Um, I don’t really know.  I’m looking at him in the side mirror and I think he’s getting frustrated with me.”

“I usually just turn the way that makes the most sense and go very slowly.  If he really starts flailing, stop, you went the wrong way.”

FNG got us parked without incident, but I have had an episode in which I was not as lucky.  In an affluent part of town, a brand new fire station was built, and my agency was given the opportunity to post there.  This fire station is abnormally pretty, and I’d heard nearly half a million dollars were attributed to art alone.  Naturally, it was dark and raining, but I was working with a partner who feared no weather, and got out of the truck to back me up.  While reversing into the designated parking space, my partner held up her hands to indicate I didn’t have much room to move.  I saw her gesture, my brain made a more creative interpretation, and I continued to reverse-directly into an incredibly expensive fence.  Once I heard metal crunching, I stopped, parked, and got out of the truck to assess the situation.  Firemen came out of the station to point and laugh, and informed me that while I wasn’t the firs
t person to hit the fence, I certainly did the most damage.  Since that incident, a bumper was installed to make the space what my supervisor called “Parapup-proof.”

My favorite ambulance mishap story comes from a friend I’ll call Evelyn Couch, who used to work in a non-emergency transport service.  Evelyn was driving a van-style ambulance to take a hospice patient who was well on his way out of this form of existence to a nursing home to which a hospital had turfed him.  Evelyn approached the nursing home, surveyed the canopy, and realized they may not fit underneath.  She relayed this to her partner in the back, ever the compassionate caregiver, who said something along the lines of, “Just get us in there so he doesn’t die back here on me.”

Evelyn carefully pulled forward to be rewarded with the unmistakable sound of crunching.  They were able to unload the patient into the facility with stable enough vital signs.  Once they exited the canopy, Evelyn noticed the light bar on top of the ambulance, which is typically perpendicular to the length, was completely parallel.  Via discussion, the team decided that the best course of action was to pretend like nothing unusual had happened.

Upon arrival at the station, Evelyn was greeted by an angry, red-faced supervisor, “Evelyn Couch!  Do you notice anything wrong with that ambulance?!”

“Well, it could really use a wash.”

“I think there’s a scratch in the paint.”  Evelyn’s supervisor failed to see the humor in the situation, and she eventually gained employment where her keen sense of humor and timing is appreciated.

What I’ve learned from my vehicular misfortunes and the tales of my cohorts’ is that we all screw up.  None of us are immune to accident or calamity, and I’m appreciative that I haven’t caused anyone injury.  After all, the end goal is to help people, but sometimes things get in the way of that aspiration, ineptitude for instance.

tangle
My New Favorite Song
That's so awesome! Have you seen the Canadian PSA for bystander CPR? Holy Zombie Apocalypse, it's fun. https://www.youtube.com/watch?v=UN4STZwjORw
2012-12-10 03:17:00

Does This Helmet Make Me Look More Aggressive?

The Design of the High-Rise Handline

Vote for my blog here!